This document is a comprehensive guide for synchronizing the OpenLM Database with an organizational Directory Server. For more concise documentation, please refer to:

OpenLM Server is capable of synchronizing users and groups with an organization’s Directory Service (e.g. Active Directory, Novell eDirectory, ApacheDS) to combine license management with other company information. For the purpose of simplification, we will relate to this process as LDAP Synchronization throughout this document.

From a managerial standpoint, it can be used for:

Functionality of Groups synchronization is part of Users and Groups extension and requires additional licensing.

This section describes detailed procedure required for synchronization of LDAP.

LDAP option is the OpenLM Server’s interface for LDAP synchronization. First it is necessary to connect to the LDAP domain: 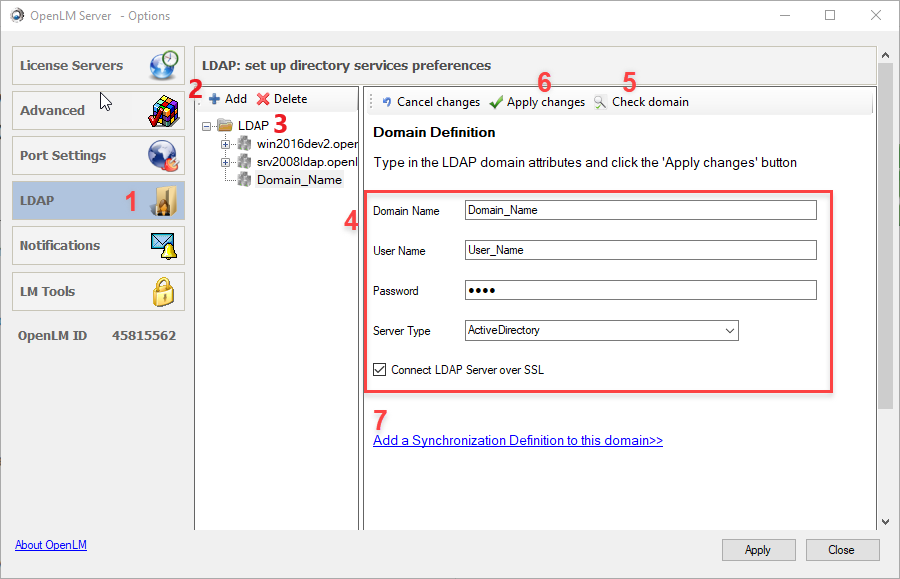 Select LDAP from the menu (1) and click Add button (2). In the Domain Definition section (3) complete empty fields with required information:

Organizations may have multiple domains (for example, in case of global organization with multiple locations). In order to add a second domain, click Add (2) again and repeat the described steps above.

A global catalog is a distributed data repository that contains a searchable, partial representation of every object in every domain in a multidomain Active Directory Domain Services (AD DS) forest. When Common Global Catalogs are applied, a single search query using port 3268 is sent to a global catalog server. This configuration is preferable to a multiple domain control configuration for both simplicity and speed considerations. Please refer to this article for more information.

After having configured the OpenLM Server to interface the LDAP server, it’s necessary to configure actual synchronization parameters. Select the newly created domain (1) and click Add (2). In the opened Options window insert the required parameters:

Clicking Select… button assigned to this field will open a tree diagram of the LDAP structure. Select synchronization start node, confirm selection by clicking green check icon. This node will be the upper-most object of the configured synchronization. 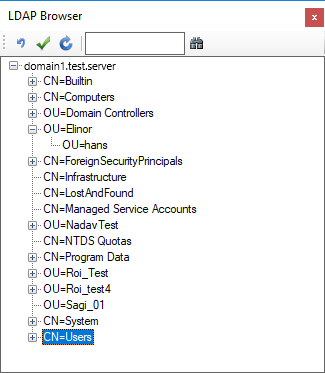 The value in this example states that user details would be updated every 12 hour. Keep in mind that the synchronization process may demand considerable server and network resources when applied to large LDAP databases.

Synchronization of Users and Computers is basic operation of the LDAP synchronization process. It is important to note that synchronizing users with LDAP might have some specifics – you may end up having taken in more users than you intended. And deleting users from the database is difficult. It is highly recommended to experiment on a separate OpenLM test environment, NOT on the production OpenLM environment.

It is possible to synchronize either Users or Computers. Use the LDAP objects to sync (6) radio buttons to choose between those.

1 – only start node group is synchronized;

Search Depth configuration has no effect on synchronization of groups.

It is highly recommended to check the Sync only active users of licenses in order to avoid adding users that do not actively use the license. New active users will be added to the list of users as they check out a license, their LDAP details get synchronized on the next Sync Time Interval.

Note: The synced users/computers will be users/computers that have shown usage over the last 3 months. Additionally, a user’s active status (enabled/disabled) is not currently checked and synchronized by OpenLM, so a user may be imported even if his status in AD is disabled.

Group synchronization introduces groups to the OpenLM database according to information obtained from LDAP. 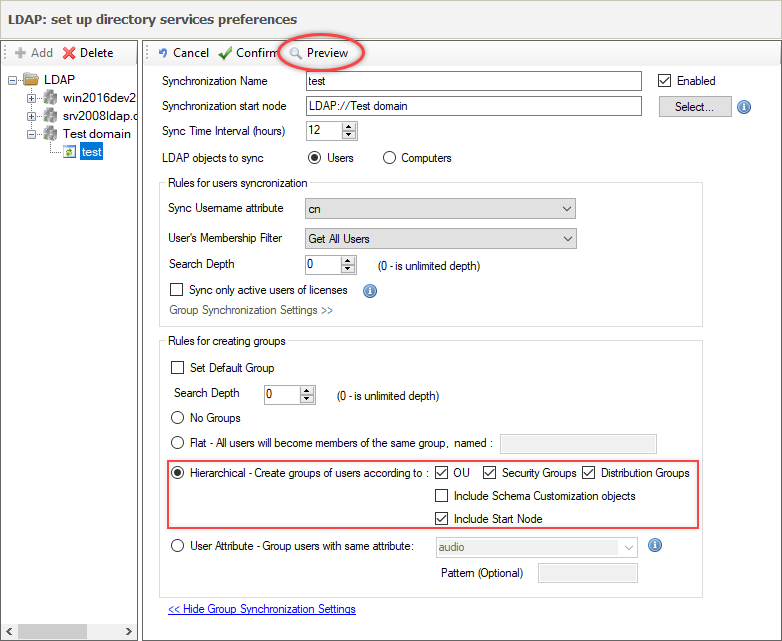 At any stage of operation it is possible to click Preview button and get a preview of groups that are going to be synchronized into OpenLM database. (For this revision 4.3 preview is implemented only for Hierarchical types of synchronization). See the Preview window below: 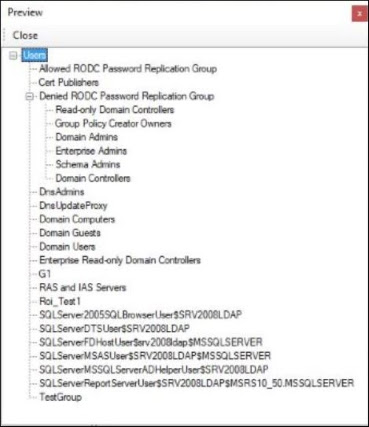 Please note that for very large Active Directories, the preview window might take a few minutes to load up. 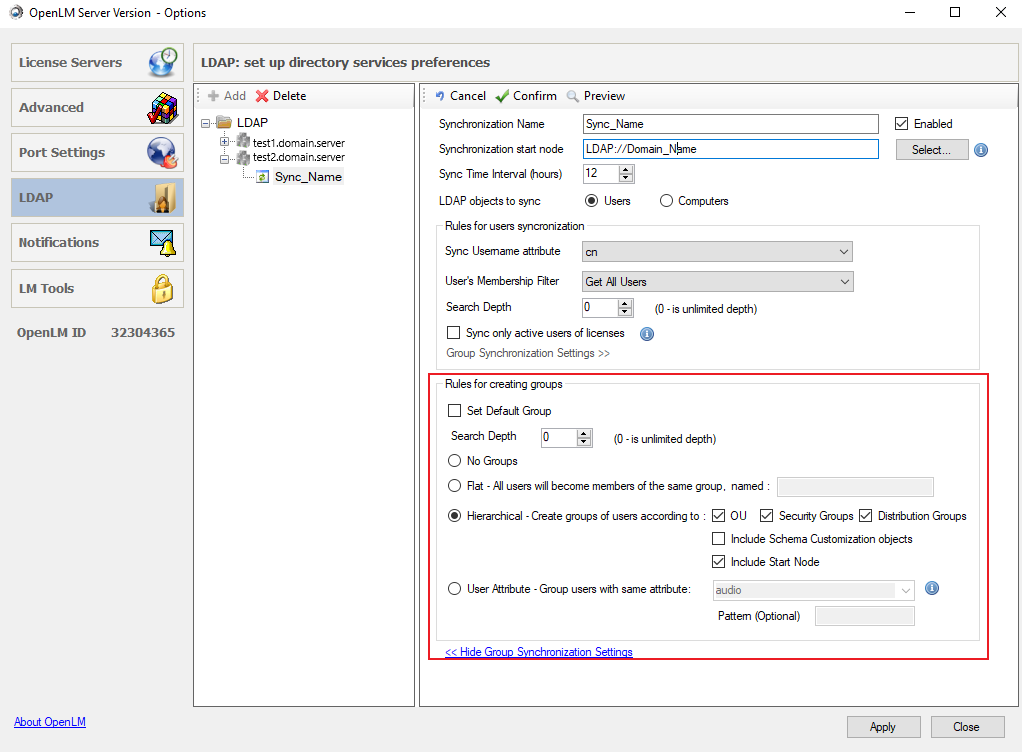 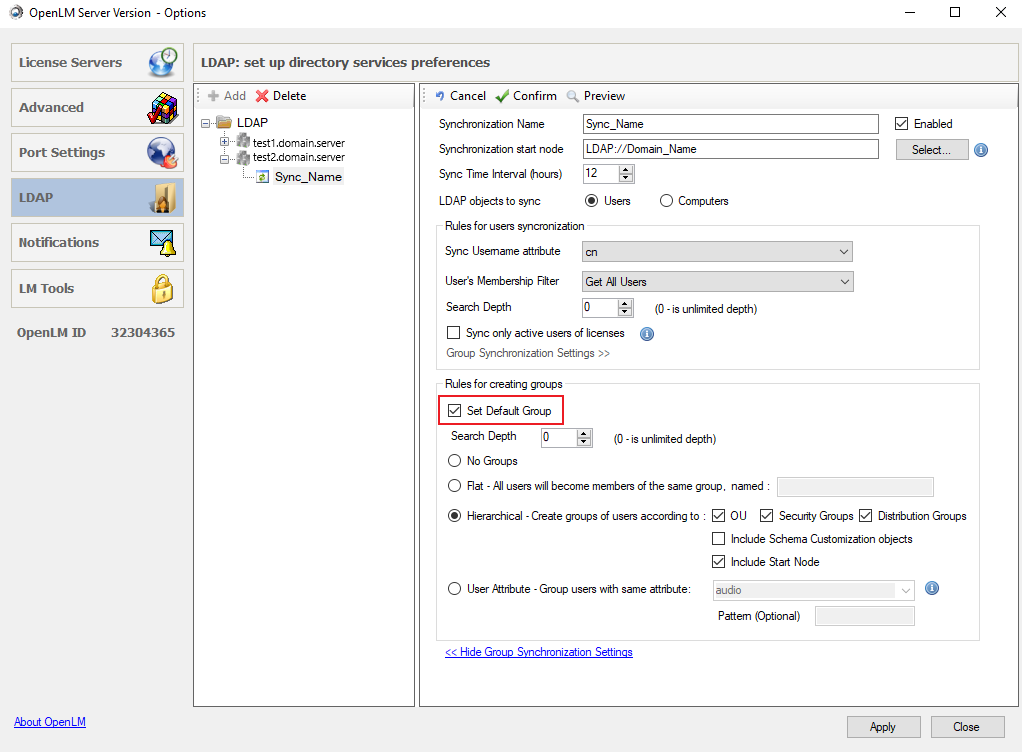 To set user’s default group, check Set Default Group checkbox in OpenLM server configuration tool. This setting determines the 1st group for a user that has been found a member of during synchronization, other than the OpenLM_Everyone group. It would be set as user’s default group.

Note: Historical usage is only recorded for the user’s default group. 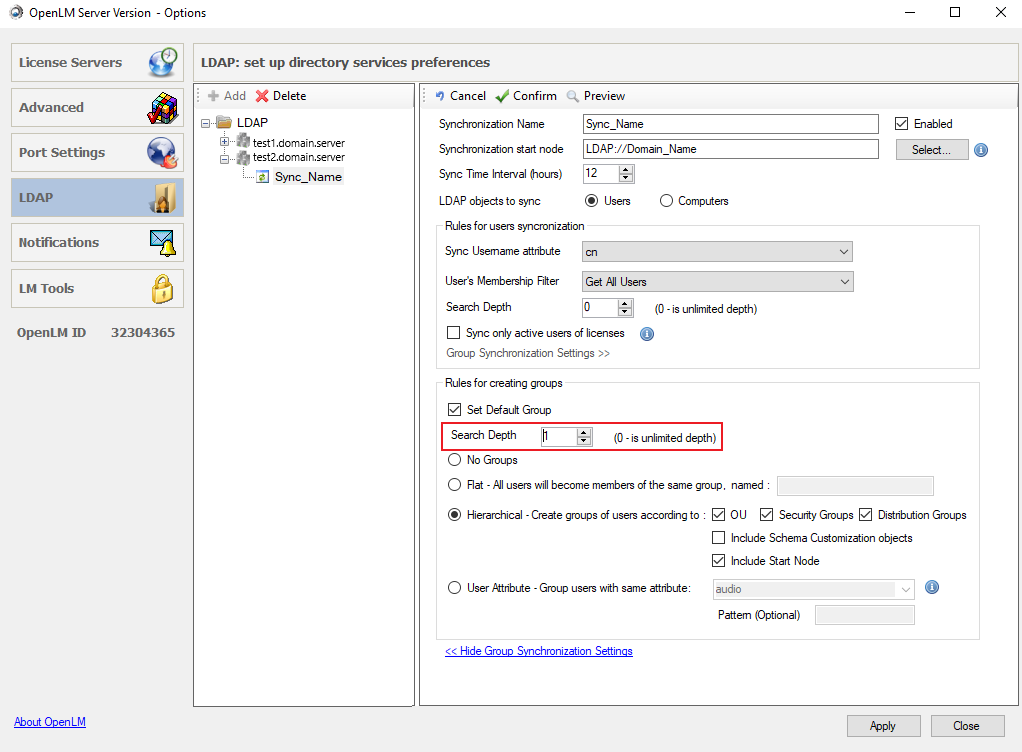 Configure the depth of search for synchronized groups:

‘1’: only start node group is synchronized;

Search Depth configuration has no effect on Users and Computers synchronization.

There are several different types of group synchronization schemes:

Flat – All users will become members of the same group, named:

With this option administrator can associate a particular group name with all synchronized users. Fixed name typed in textbox is the group name of users that would consequently be synchronized in this way.

Hierarchical – Create groups of users according to…

OpenLM can create groups of users and computers according to hierarchical LDAP node tree. Synchronized group entities include OUs (Organizational Units), Security groups and Distribution groups. User can set synchronization scheme to include any combination of these entity types.

Hierarchical – OUs (organizational units): this option is used by organizations that have an organizational hierarchy represented in LDAP; for example, departments nested inside divisions. By selecting OU synchronization method, users will be introduced into groups in the OpenLM database. These groups are going to be named after the LDAP OUs under which the users have been created.

Hierarchical – Security Groups: this option goes through list of users that populate Security groups’ nodes beneath the selected node. OpenLM groups are named according to these LDAP Security groups.

Hierarchical – Include Schema Customization objects: customized object of a user, meaning that if he has an entity that is not OU/ Security/ Distribution application supports it.

OpenLM groups are created according to specific attributes their members have. In order to do that, check the User Attribute –  Group user with same attribute radio button (1). Click the lookup button assigned to this field and select from the drop-down menu appropriate attribute. Examples of attributes are: “Division”, “Employee ID”, “Initials”, “Cost center”, etc. Type in a Regex expression that would articulate the required attribute. Note that User Attribute drop-down menu doesn’t take values from client’s directory, it is a preset list of values. Custom attributes can be entered if they are not part of the list. 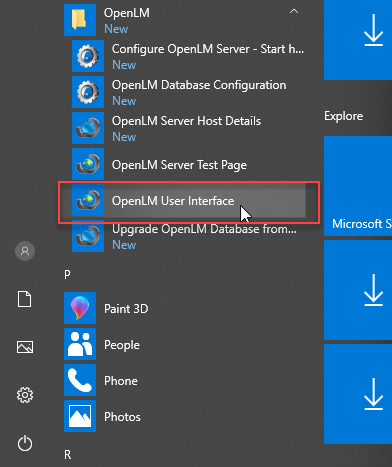 In the opened window go to Start and click on Administration menu: 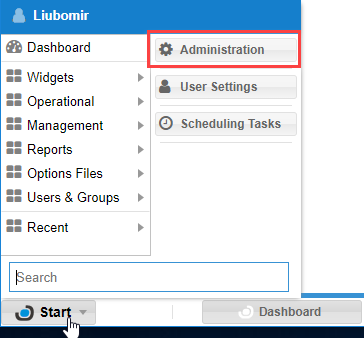 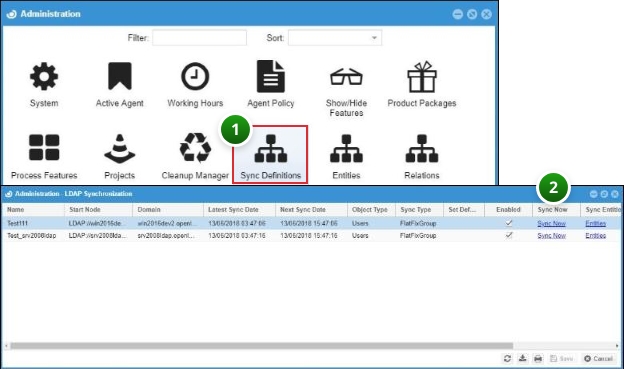 Results will appear when Synchronization is completed. 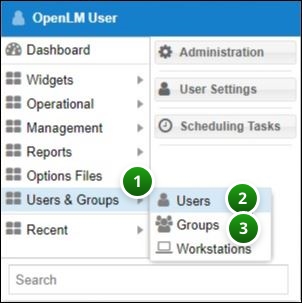 If you choose Users in Users & Groups menu, the following window appears. For more information, check Show disabled checkbox (1) and double-click name of a user:

For more information check Show disabled checkbox (1) and double-click name of a user. In the screen below GuestUser and GeneralUser are by default disabled users:

More information can be shown by selecting a user and then clicking Edit user button: 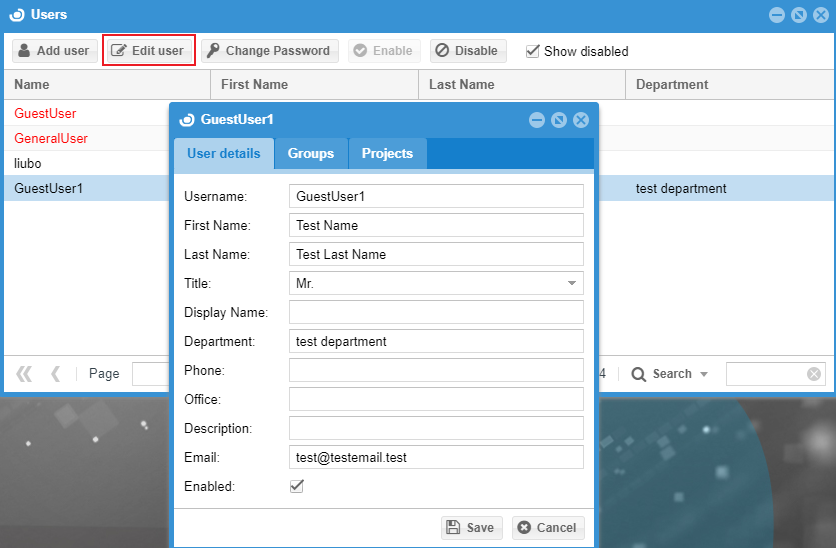 If you choose Groups, the following window appears. OpenLM_Everyone is by default disabled group:

Default group is a property of the user and defines the group that will accumulate usage time for that user. “OpenLM_Everyone” groups include all users that do not have a set default group, their license usage is accumulated in that group.

LDAP synchronization may be implemented so that users would become related to specific user default groups, other than OpenLM_Everyone group. The default group name is marked by a check, highlighted in blue color and can be found in specific user’s windows, under the Groups tab. 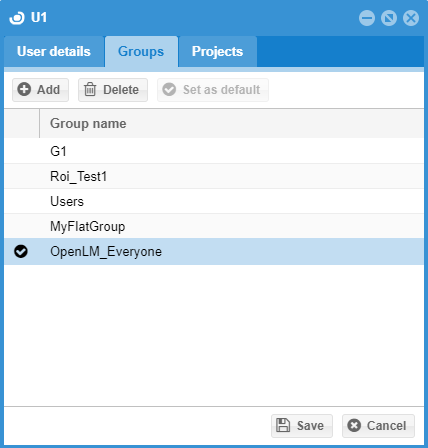 There are 2 options of viewing Entities. From Administration window click Entities:

or go to Sync Definitions and click Entity link in the LDAP Synchronization window: 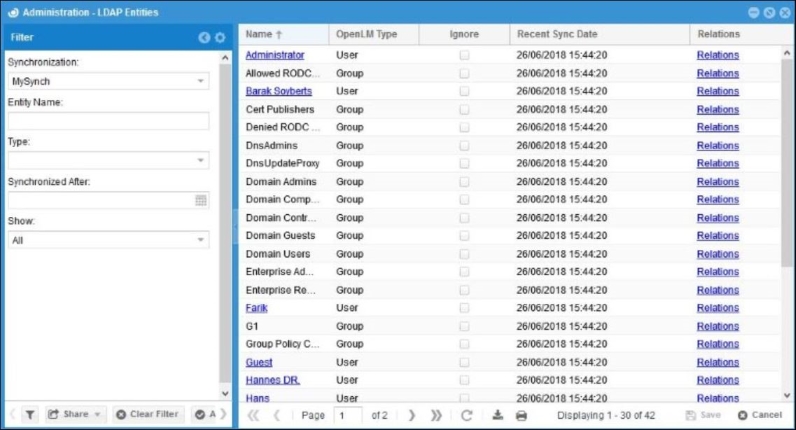 You can also mark certain entities as ignore (1) and remove ignored entities from display by clicking Save button (2):

This screen shows Relations display for user U_A1. Note that here are displayed groups to which U_A1 user belongs to as well as Synchronization name and date of synchronization.

In order to demonstrate different methods of group synchronization we have created the following Organizational Unit structure and enabled all users.

groups are marked by yellow circles;

users are marked by small rectangles;

bubbles mark nodes where users have been defined;

OU_AA & OU_BB and their subsequent groups and users were only configured on the later case studies (see below). 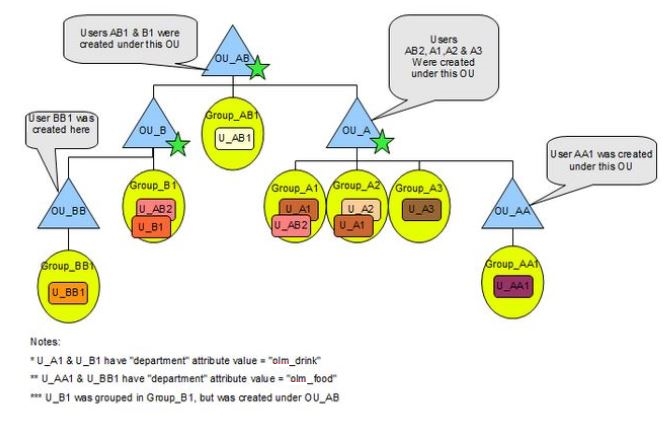 Two parallel synchronization schemes were configured: for users and computers. 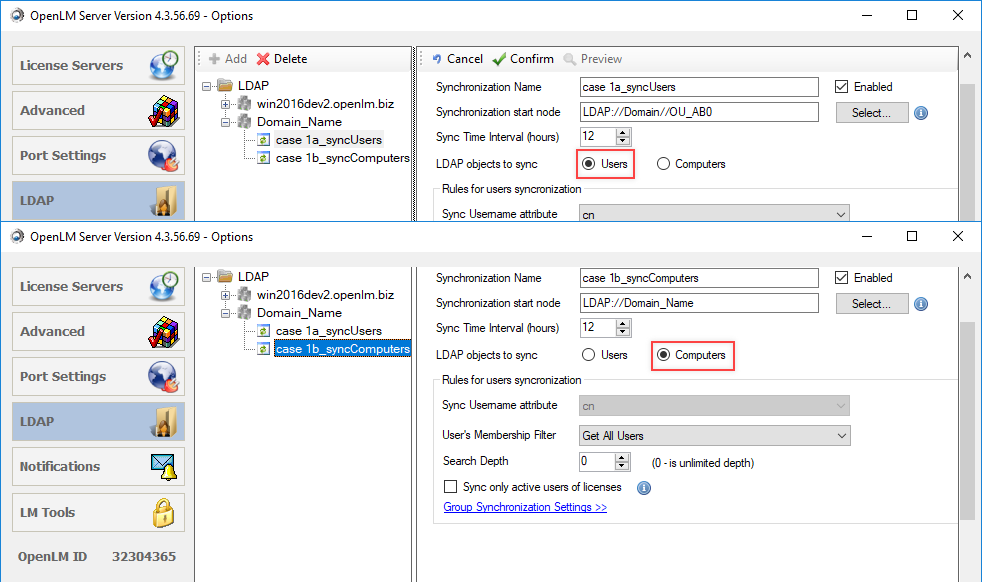 CASE 1B: NO GROUPS

Users synchronization was configured to include all users under that start node.

Groups’ synchronization was configured Flat – All users will become members of the same group, named… (1) and type in the name of the new group: 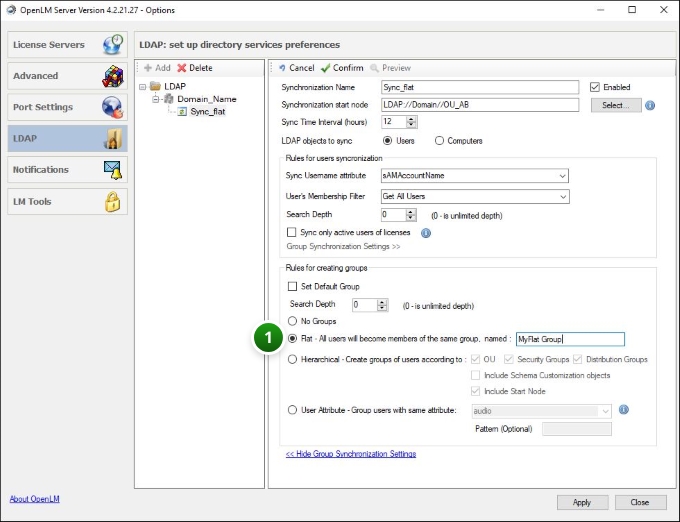 All users were synchronized and collected in MyFlatGroup group: 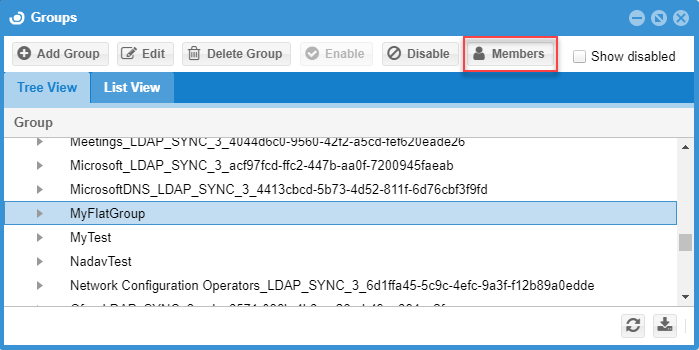 In the opened Users in MyFlatGroup window you will see list of users in a particular group:

Two parallel synchronization schemes were configured: for users and computers.

The hierarchical group search depth was set to ‘0’: Full tree.

All groups, OUs, users and computers beneath OU_AB were synchronized. The Hierarchical tree was preserved. 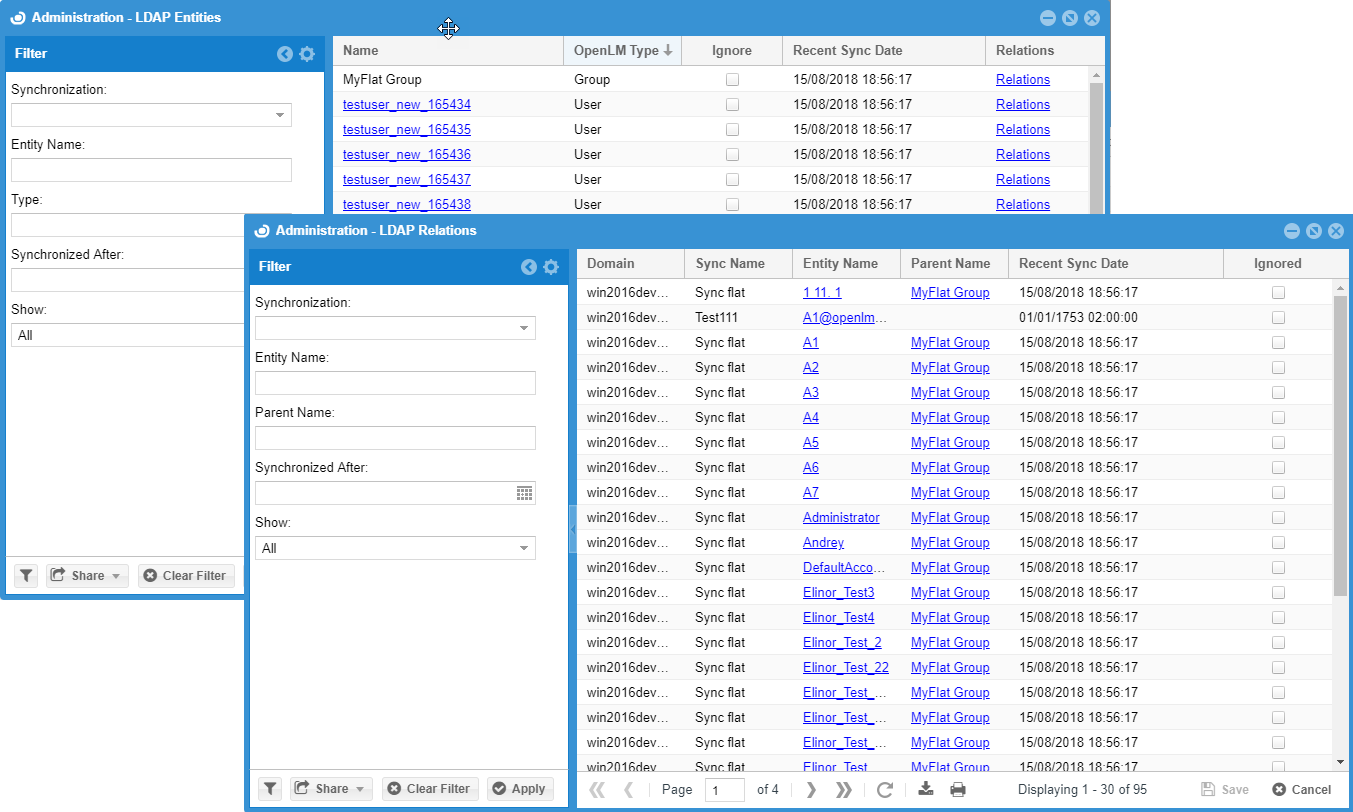 In the Users&Groups menu, Groups submenu, OpenLM User Interface shows all groups in Tree or List view. Users are assigned as members of these groups. In the example below users U1, U2 and Guest are members of group MyFlatGroup 2: 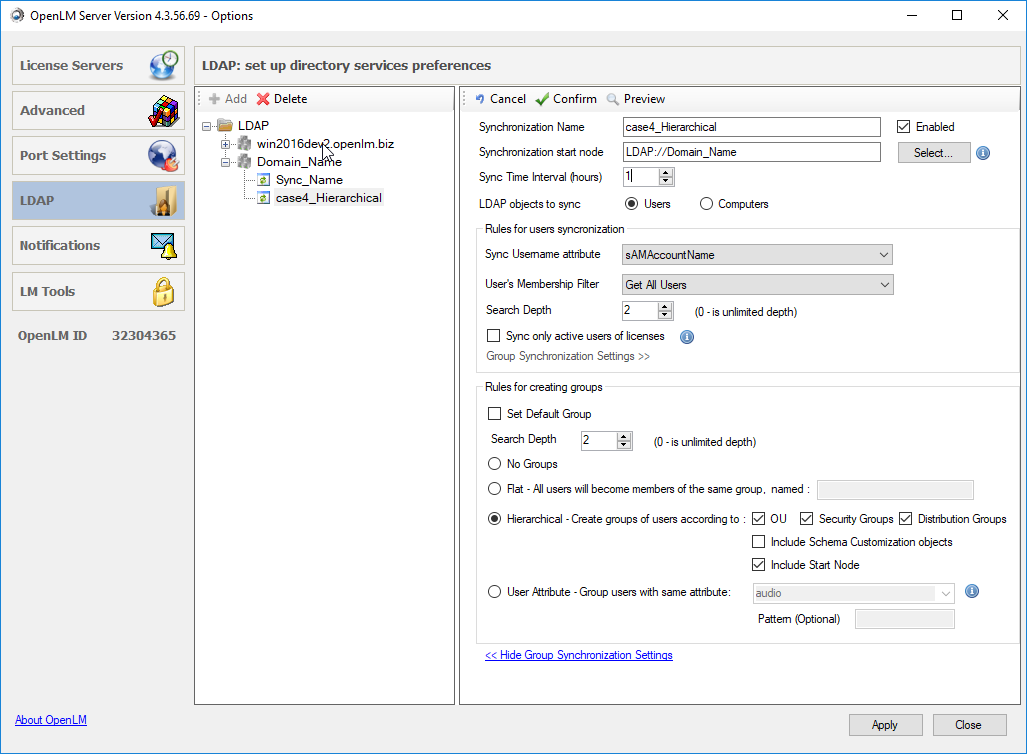 All OUs and groups in the uppermost entity and its immediate descendants were synchronized.

All users which were declared in the uppermost entity and its immediate descendants were synchronized.

Users were properly grouped within these limitations:

User search depth was set to 2.

Groups search depth was set to 1.

Only the uppermost entity OU_AB was synchronized.

All users which were declared in the uppermost entity and its immediate descendants were synchronized.

Group OU_A contains all the synchronized users that were set beneath it: 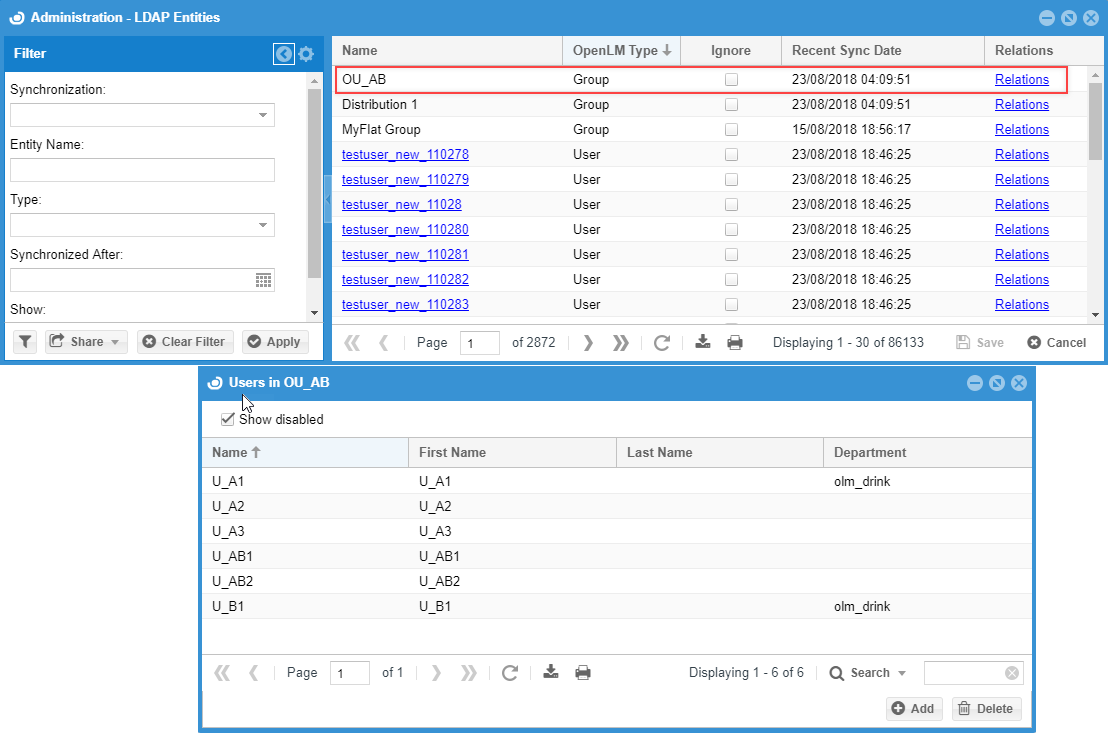 Depth of hierarchical group search was set to ‘0’: Full tree.

“Sync only active users of licenses” box was checked and user U_A1 logged into OpenLM in order to establish its status as an active user. 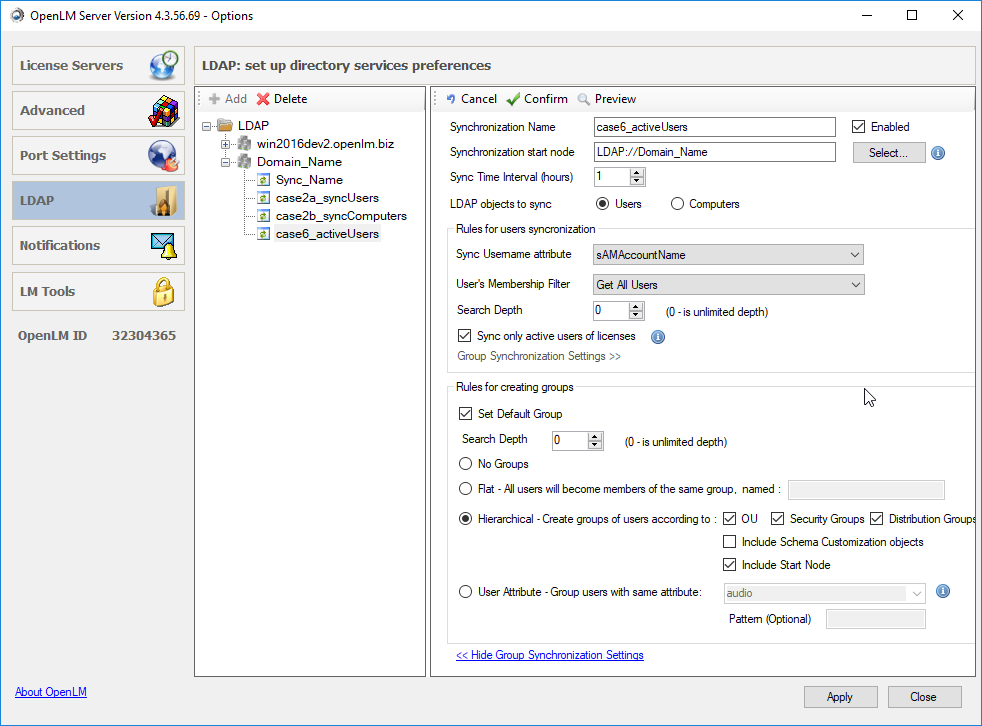 All LDAP groups were introduced in the OpenLM database. 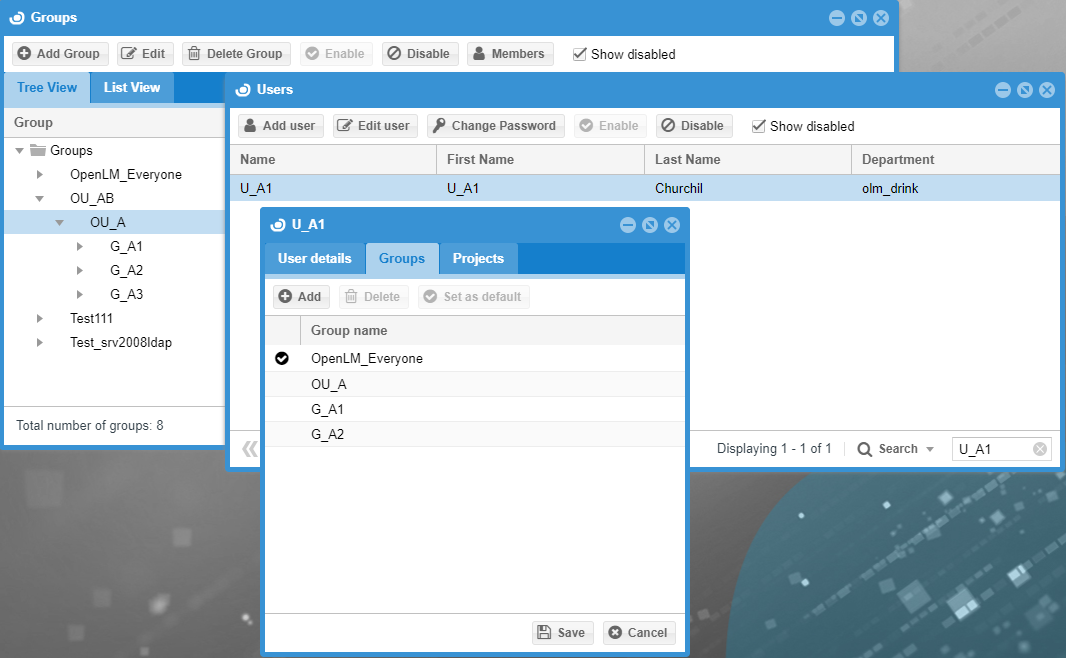 OU_B was selected as the start node.

Users’ synchronization was configured to include only users within Security groups.

All users under OU_B node grouped under security groups were synchronized:

CASE 8: SYNCHRONIZE ONLY USERS WITHIN OUs

OU_B was selected as the start node.

Users’ synchronization was configured to include only users within OUs.

Only user U_BB1 was synchronized. 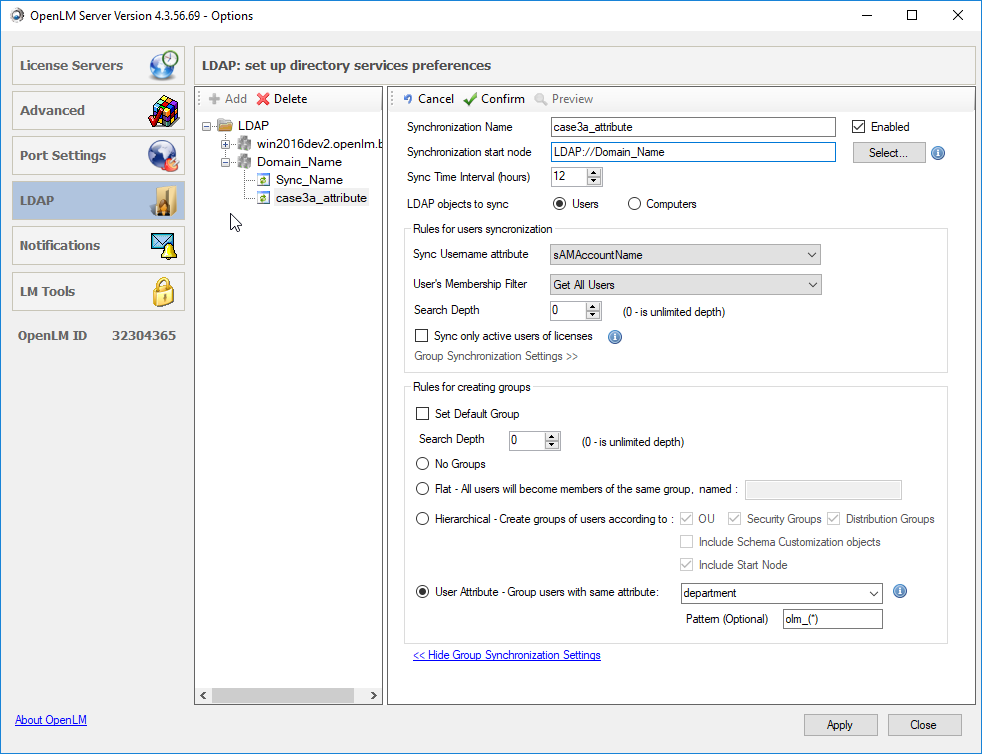 All Users in OU_AB were synchronized.

OU_B was selected as start node.

All users under this node were synchronized.

OU_AB was selected as start node and a 2nd phase of synchronization was applied. 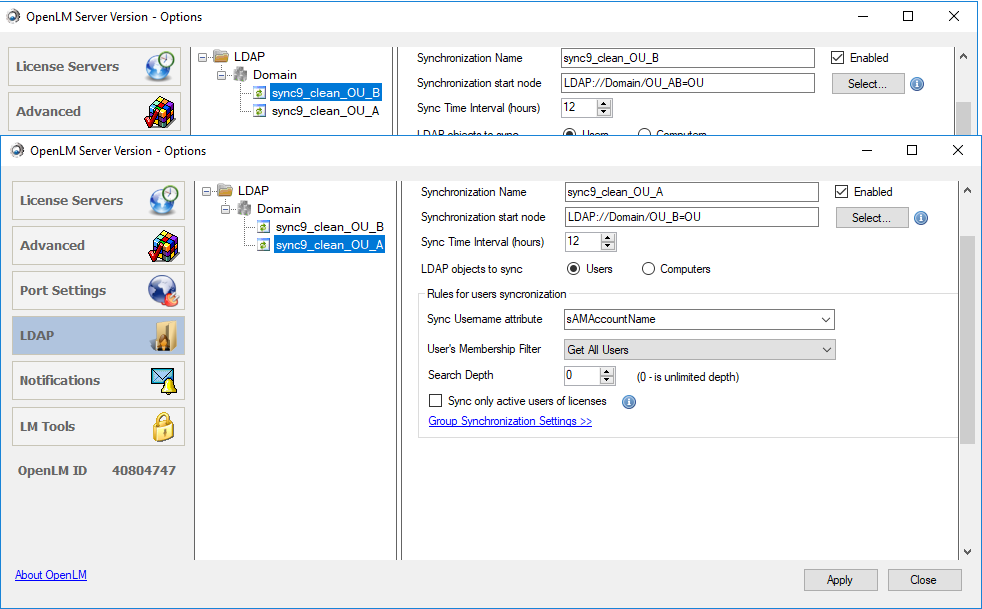 Only users which were not included in the OU_B node remained.

After Synchronizing OU_B, all users under that start node were present:

Then cleanup was applied to users: 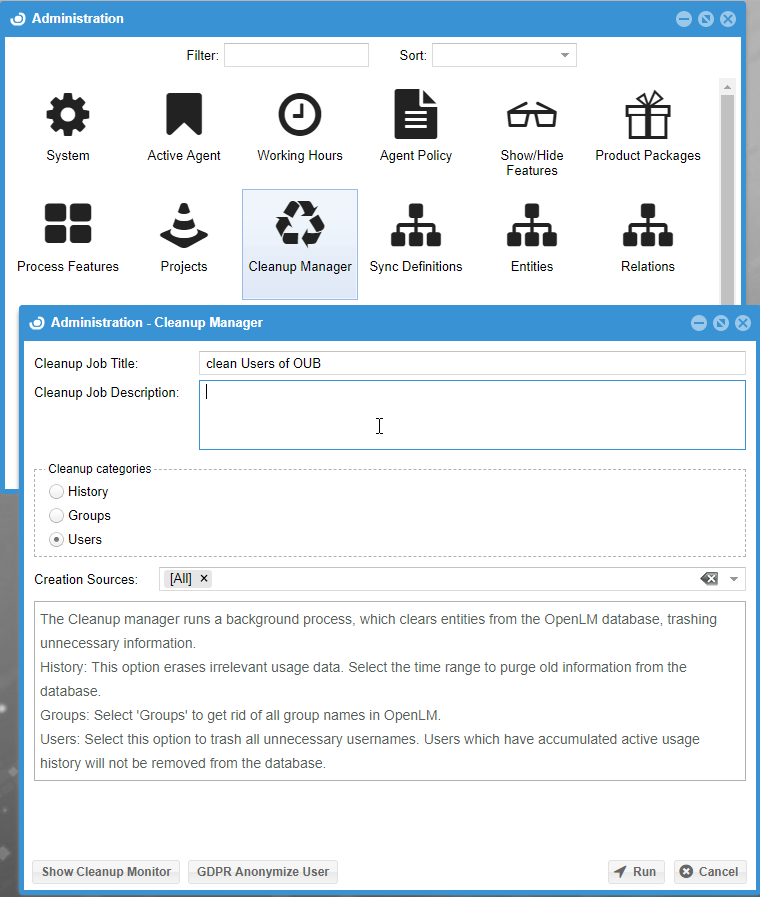 And all the users were eliminated:

After that – synchronization of OU_AB was applied. All entities from both synchronization processes appear in LDAP Entities window but only OU_AB users that were not part of OU_B were synchronized and are displayed in Users window.

In particular U_AB2 which was a member of the first synchronization hierarchy will be omitted from users’ list during cleanup process, and will not be reinstated there after the 2nd synchronization. 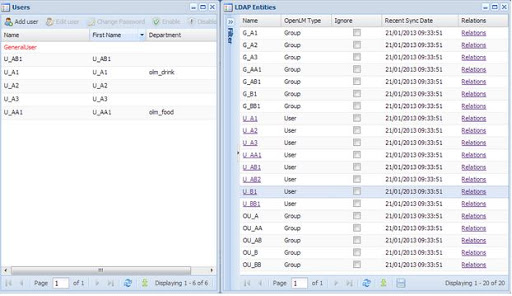