This document describes the OpenLM Roles and Permission Groups feature, and serves as a reference guide to system administrators who seek intricate grouping and permission granting over their OpenLM managed licensing control system.

The OpenLM Server supports a role-based security feature that enables system administrators to implement customized access to OpenLM tools by setting access roles. This feature facilitates the implementation of OpenLM tools for diverse groups; like help desk, system administrators, managers and developers. The role based security system secures nearly all the resources of the OpenLM system’s entities, such as listed servers, fields and action buttons.

A set of such Resource permissions is referred to as a role. Roles are attributed to certain groups of function holders in a company, each group having different accessibility options to OpenLM’s resources.

The characteristics of the roles and permissions feature have evolved over time, through constant feedback from OpenLM’s dependable customers, and are continuing to evolve according to common requests. For this reason OpenLM encourages its customers to send back their feedback and specific required features.

In order to create a new role, go through the following steps:

2. Roles need to be created using OpenLM Administrator privileges, so go to the OpenLM EasyAdmin interface and click Start –> Administration –> System & Security –> Security Tab –> Require Login Credentials –> Save.
In the dialog promped, enter username and password for the admin superuser –> Next –> Enter verification code (Sent to your inbox) –> click Next –> Choose a strong password and repeat it –> Click Confirm. 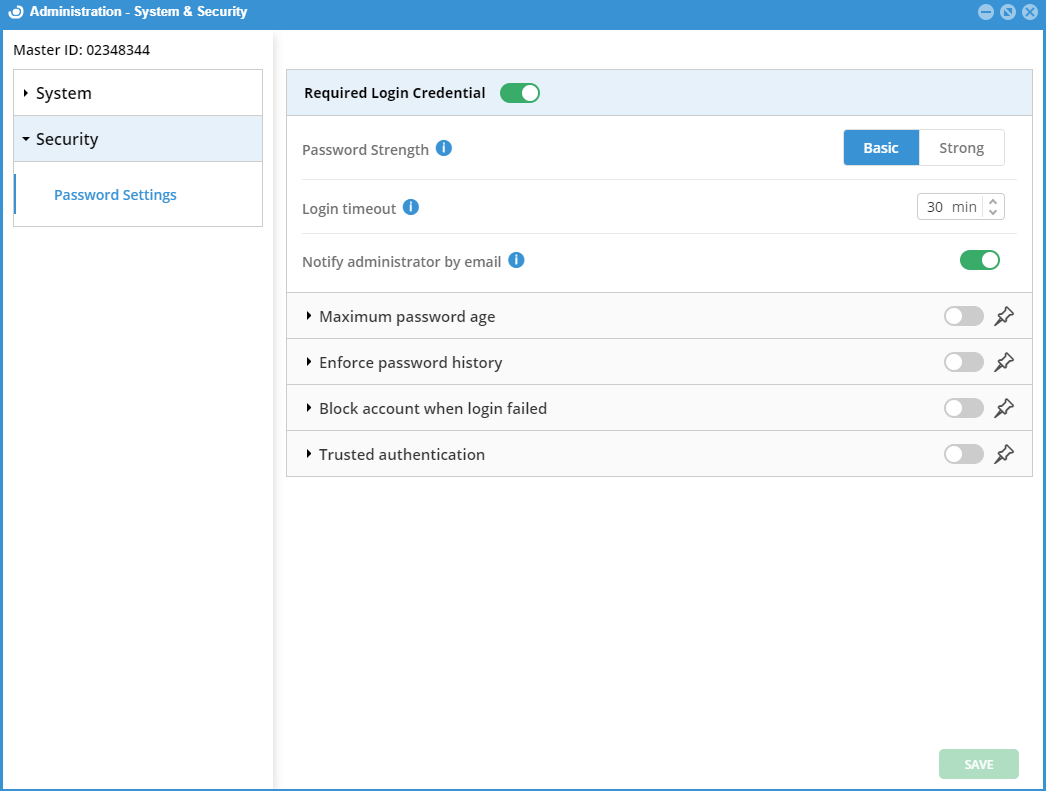 4. Click the Start button on the EasyAdmin control panel. Select Administration → Roles tab. The Administration-Roles window appears, with some predefined default roles and their description. 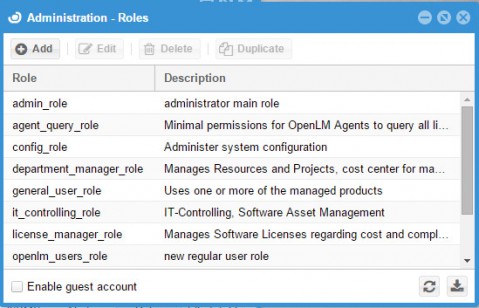 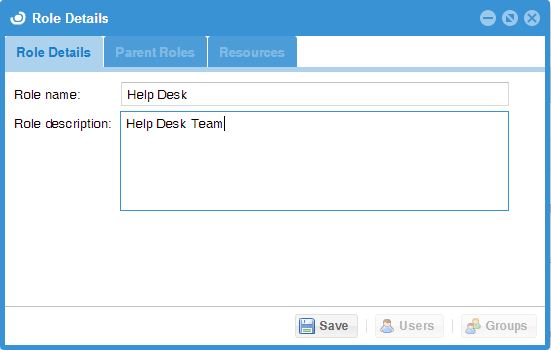 6. Type in the role name and description (e.g. “HelpDesk” and “Help Desk Team” as they appear respectively in the image above). Click Save. Note that the new role name would be saved in lower-case format (i.e. “helpdesk”). 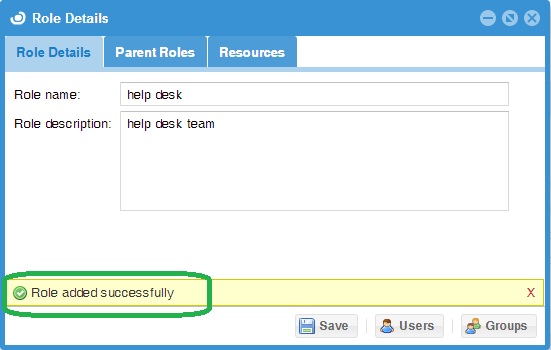 1. In the Roles window, Select the required role, e.g.: “helpdesk”. Click the “Edit” icon. The “Role Details for helpdesk” window appears (Similar to the “Role Details” dialog window depicted above). Note that the default predefined roles may not be edited.

2. Select the Resources tab, and click the Add button. The “Resources Search” dialog box appears. Note that each line in this table contains a Resource name and description, easing the linkage between a registry in the table and its actual function in the OpenLM system.

3. Select a resource (e.g. the add_project as marked above), and click the Select button. The “Role Details” window’s Resources tab now appears with the newly attached “add_project” resource.

4. Select the Resources tab and click on any line while under the Permission heading. The drop-down functionality is engaged and the user may now select a permission attribute for a resource per user. 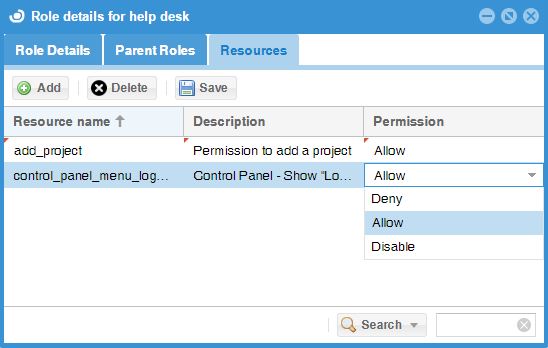 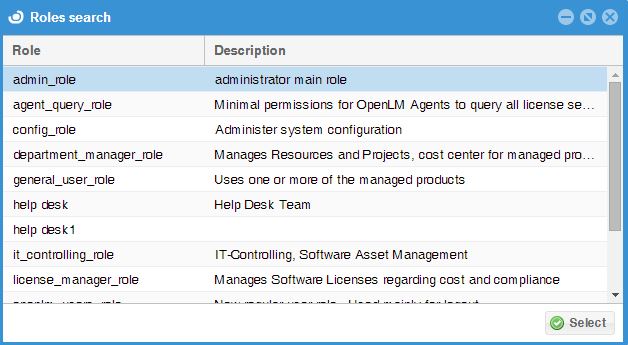 In order to assign roles to users, we should first make sure such users exist in the OpenLM database. The list of users is shown in the EasyAdmin ‘Start’ → “Users & Permissions” → “Users” tab.

Users can be added to the OpenLM database in a number of ways:

1. By synchronizing the OpenLM database with the organization’s Active Directory. See these Application notes for more information:

2. Through monitoring of license usage.

4. By reading the FlexLM Options file

5. Manually created, as described below.

Only users who have been introduced into the OpenLM Database via the last option (Manually created) are assigned an EasyAdmin login password in the process. Other users need to be assigned login passwords in order to access EasyAdmin. In order to do so:

In order to manually create a new user entry in EasyAdmin, go through the following steps:

2. Click the Add User button. The User details form appears. Fill in the appropriate information items, check the Enabled box and click Save as depicted below. 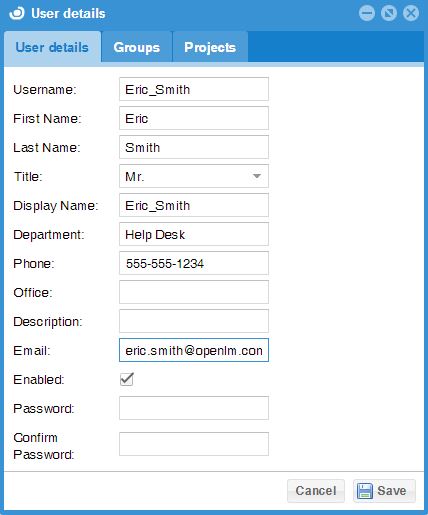 Note that the new user, Mr. Winston Churchill, has been assigned an EasyAdmin login password in the process of introduction. The new user’s information is presented attached to the Username on the Users window: 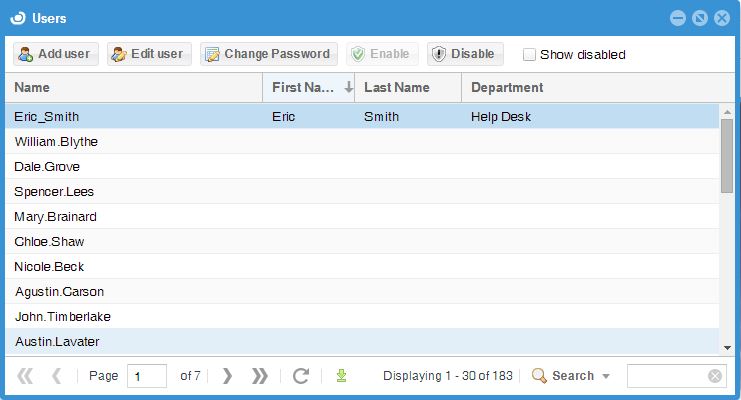 Manually adding a user to a group

Users can be made members of a group by either:

1. Synchronizing the OpenLM database with the organization’s Active Directory. See these documents for more information:

2. Manually, as described below:

b. Select a group from the Group window (e.g. “GroupName”), and click the Members icon in order to view the members of the selected group. The Users in Group Name window appears.

After establishing a new role of permissions and introducing a new user or group of users, it is now possible to attach this role to the users, in order to assign the role’s permission set to these users.

In order to do so, Please:

3. Click the Users or Groups buttons on the bottom of the window. The appropriate window (i.e. the Users in helpdesk or Groups in help desk) appears.

4. Click the Add icon. The appropriate window (User search or Groups) appears. Select the required instance of user or group, and click the Select icon. The added user or Group instance has been added to the role, and may be seen there in the Users in help desk or Groups in help desk window.

1. Follow this path: EasyAdmin Start –> Users and Groups –> Workstations. In this example – this would be the affected Resource.

4. Select the Resources tab and click the Add icon.

7. Click the Save icon, close and reopen the OpenLM EasyAdmin UI.

8. Click the Start button on the EasyAdmin control panel. Select the Users & Groups tab. Notice that Workstation is no longer visible. It has been removed from the admin_role view.

If the permission of a Resource entry which name starts with the word “server_*” is disabled or denied, the respective user groups would become unable to view items on that server. Moreover, that server would become omitted from the OpenLM Agent’s “License usage information” window.

1. Uncheck, and then recheck the Require Login Credentials checkbox. Follow the Creating a new role section above.

2. Assign resources to the new role: After you save the new role, the Resources tab will become enabled. Navigate to that tab. Note that it is assigned with one default resource. Now you need to add all resources that have this name pattern “server_servername” e.g. server_srv1 (where srv1 is the name of the server that you will grant access to). In order to do so, Follow the description in section Adding resources to a role above.

3. Assign the new role to the admin user: In order to do so, Follow the description in section Assigning roles to a user or group of users above.

Using the permissions tool, it is possible to grant resource permissions to single users independently. Also, as stated above, permissions may be inherited from parent roles. If one method grants permission and the other denies is, a mismatch condition may be present. In this case – an arbitration procedure is executed; The closest entity to a single user, i.e. a permission attribute granted to an individual user, or to the “youngest child” of an inherited attribute is the most “powerful”. If two contradicting attributes of the same strength are applied: an unknown condition may occur.

For example, picture the following circumstance:

Please see the example below:

A ‘Guest’ user role may also be defined. This user will not require a password in order to login, and will normally be granted limited permissions.

In order to do so:

On the next EasyAdmin login the user will be handed the option to log in as a guest, without the need to type in a password.

The following is a list resources that are available on the OpenLM version 3.0.0.*