OpenLM is a software license monitoring tool for a variety of concurrent license managers. It provides productivity tools for license usage optimization and application usage management.

The OpenLM Agent is a lightweight optional software component that is installed on end users’ workstations. It provides a set of capabilities that empower end users, making them less dependent on system administrators. The Agent does not present a risk of negative impact on the organization’s network; It limits end users’ capabilities to a subset of safe actions according to their specific area of work.

The OpenLM Agent provides a wide variety of productivity tools, affecting the working environment in many aspects:

Who’s Got My License?

End users are able to find out who’s got the license they need, and contact that person.

After the license pool has been exhausted and end users are denied from checking out further licenses, they would receive license availability notifications when these licenses have been made available again (see below). This option is enabled by checking the EasyAdmin Start → Administration → Agent Policy ”Available license notification” box.

Additional information such as the Workstation IP is provided to the OpenLM Server by the Agent.

The OpenLM Agent is available in the Downloads section on the OpenLM site. OpenLM Agent can either be installed manually per workstation, or silently distributed by a script: OpenLM Agent Silent Installation. After installing the software on the workstation, an OpenLM agent icon will appear on the taskbar.

Right click the Agent’s icon to display the following menu: 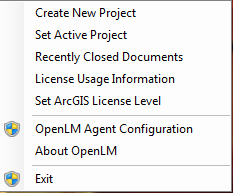 The ability to query license availability from the end user workstation is a very important step towards improving license usability. The license usage window displays the total number of used, borrowed, and available licenses per license server. Click on a row to get the complete list of active users who are currently drawing on a specific license (e.g.: ArcView). Click on one of the user entries (e.g.: CPearson), and you will get the user’s details as are available on the OpenLM database. 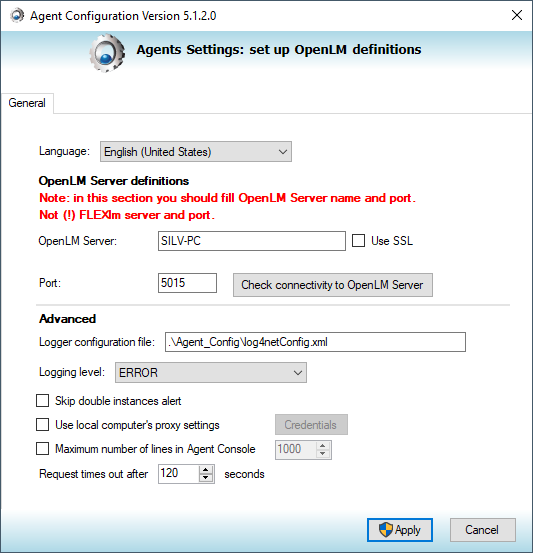