A. Get Started with OpenLM

OpenLM has received customer requests to have the ability to delete items from the OpenLM database. This request stemmed from a variety of motivations:

Back up your database #

It is imperative to stop the OpenLM Server service, and back up the database prior to the actions described in this application note.

The Database cleanup process is final, and there will be no possibility to retrieve the erased data.

Select one of the three cleanup methods (History, Groups or Users), provide the cleanup configuration a Title and a Description. Click Run. 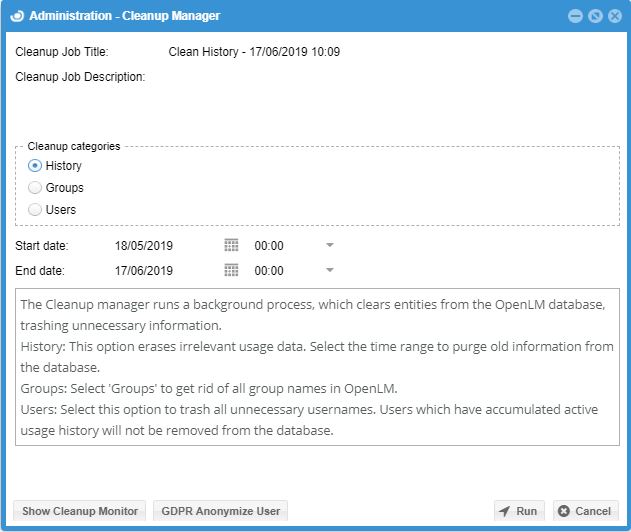 It is possible to observe the progress of the cleanup process by clicking Show Cleanup Monitor. This will open the monitor window:

History cleanup would delete historical entries according to the time period configuration, from the following database tables

Groups’ linkage to other OpenLM database tables is also deleted as follows:

Groups which are NOT deleted #

OpenLM enables administrators to permanently delete the user pool. Deleted users are marked so that they do not get re-introduced by periodic OpenLM Directory Synchronization. See this document for more information:

Cleared users will be reintroduced when they check out monitored licenses.

Users’ linkage to other OpenLM database tables is also deleted as follows:

Users which are NOT deleted #

Generally speaking, users who have records of historical license usage or denials will not be deleted by the Users deletion option. This specifically relates to the following records:

For deletion of group or users – the drop-down titled “Creation sources” allows for narrowing the deletion process to fit only entities that stem from a specific source (Either from Directory Synchronization, Options File, License Usage etc.)