Version 5 of OpenLM Server comes with some changes. Here’s what you need to know.

Installing OpenLM Server version 5 means that you will also have to upgrade any of the components that interact with Server.

The minimum component versions compatible with v5 are:

The default communication port for OpenLM Server is now 5015. There are no more different ports for each application: Broker, Agent, Router, etc… All communication is done on 5015.

What if I’m upgrading from v4, do I need to change any settings?

If upgrading from v4, the installer will detect previous port configurations and keep the old port numbers only for the Broker port (7016) and the Agent port (7012) unchanged. This way, if you have any version 5 compatible Brokers or Agents pointing to an existing v4 OpenLM Server that you plan to upgrade, no changes will be necessary. These settings are automatically written in the OpenLM Server/bin/appsettings.json file.

If you’re installing v5 from scratch, the main port will be 5015. If you already have Brokers or other components pointing to the same hostname or IP address, you have two options:

What if I had previously configured Server ports to use HTTPS/SSL?

If you have previously configured SSL for OpenLM’s ports to be served via IIS, you will have to remove the IIS bindings as they will conflict with the ports specified in appsettings.json and the Server process will fail to start. A manual change to use SSL will also be required.

1. Go to IIS → Sites → Default Web Site → on the right panel, click on Bindings and remove any conflicting ports except those used to serve EasyAdmin: 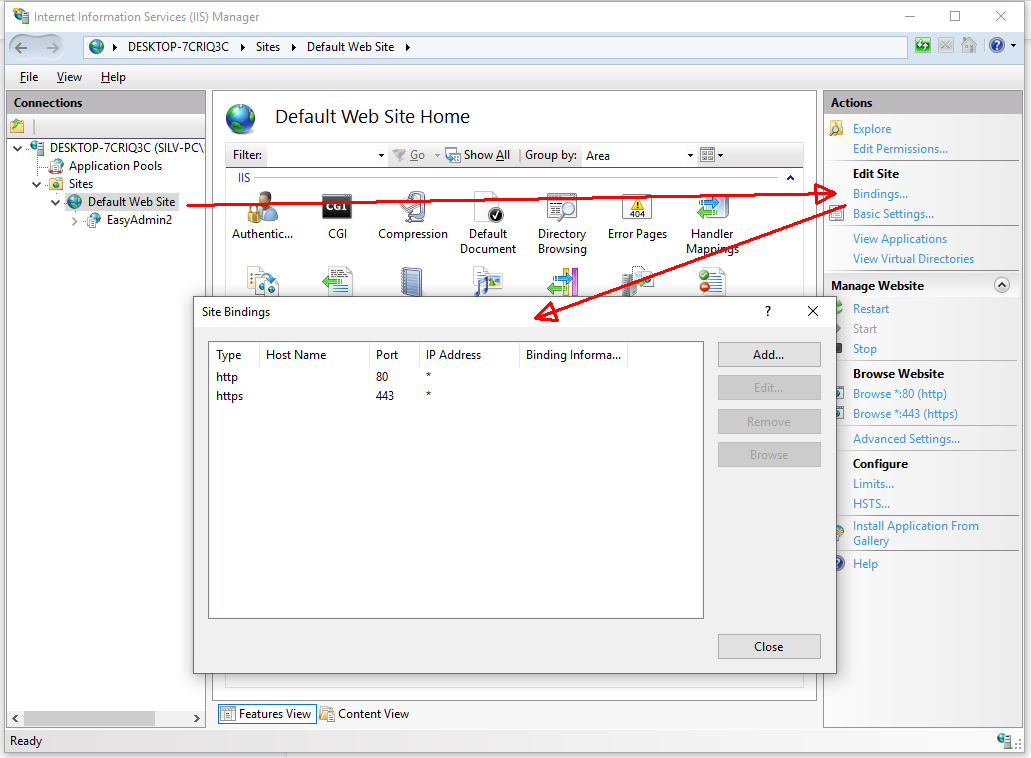 2. Open the C:\Program Files (x86)\OpenLM\OpenLM Server\WebApps\EasyAdmin2\params.js file in a text editor with administrator privileges and edit the protocols to use https. Make sure the FQDN name is exactly as it’s written on the SSL certificate (e.g. hostname.com, etc.). 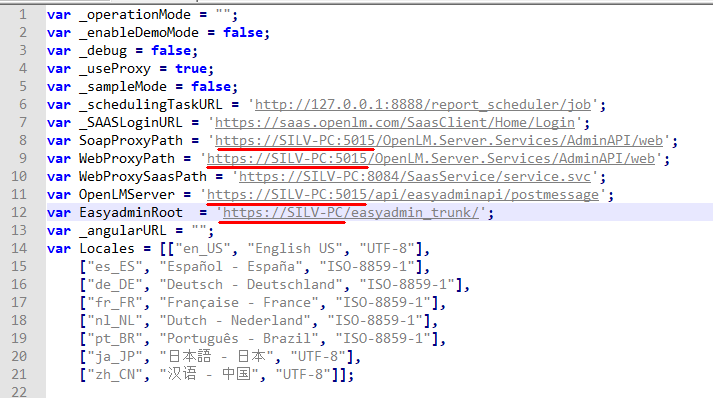 a) to use a certificate from the Windows store

Where “Subject” is the owner of the certificate, whom it has been issued to. This can be found by going to Run → certmgr.msc → select the certificate store where your certificate resides → double-click on it → click the Details tab → locate the Subject

“Store” indicates the certificate store. The “Personal” store is referred to as “My” and the “Trusted Root Certification Authorities” as “Root”. For the names of other certificate stores, consult this article.

“Location” can be either LocalMachine or CurrentUser.

Set “AllowInvalid” to true to permit the use of invalid certificates (for example, self-signed certificates).

b) to use a certificate with a specific path

Important: for both options a) and b) it is mandatory that the certificate is also installed and present in the certificate store of the machine connecting to OpenLM Server (e.g. Agent).

If configuring SSL on a new install of OpenLM Server v5, check out this guide instead.

Your version 4 license file will not be compatible with OpenLM Server v5. Please request a new license file from sales@openlm.com

Does this mean that if I upgrade without DSS & DSA I will lose my current syncs?