What is new in OpenLM version 3.3

OpenLM has recently released a new version: 3.3. Though not considered a milestone version, 3.3 does contain a substantial number of important enhancements and fixes, applied to many of its modules. This document is an overview of the new capabilities embedded in version 3.3.

Benefits of the Usage Analytics tool 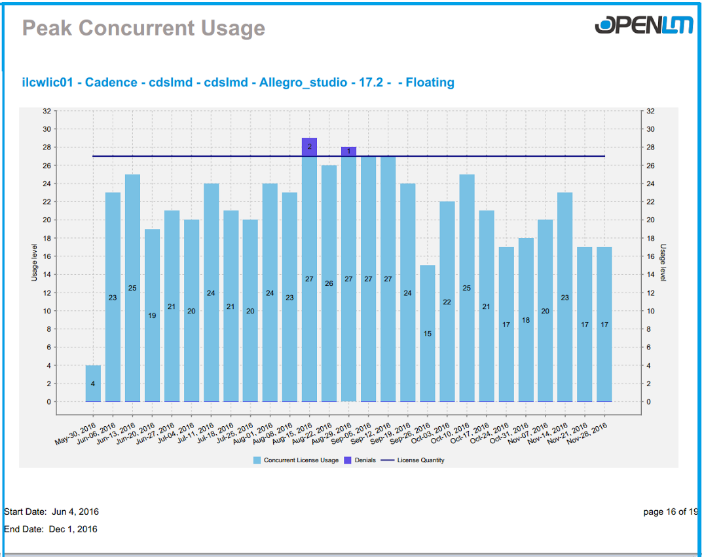 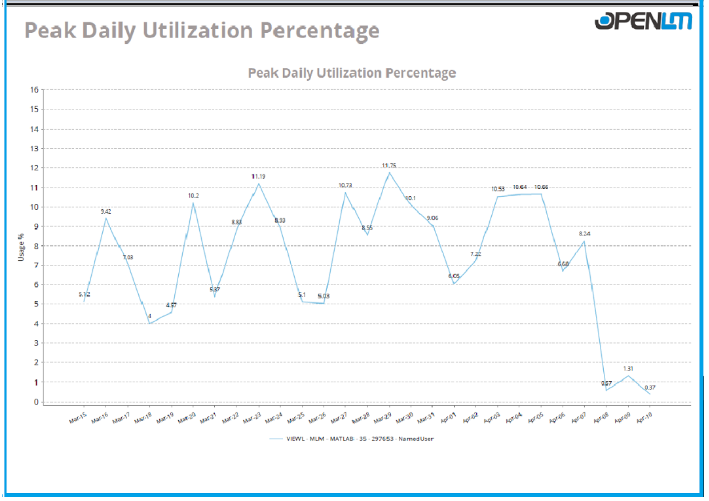 Please contact our support team at support@openlm.com , and our representatives will be glad to assist online with the installation and customization of the Usage Analytics tool.

OpenLM version 3.3 presents the ability to directly intervene in the process of license drawing. We call this the “OpenLM Proactive License Manager”.

Benefits of the OpenLM ProActive Management

The image below depicts a simplified block diagram of the OpenLM Proactive License Manager solution: 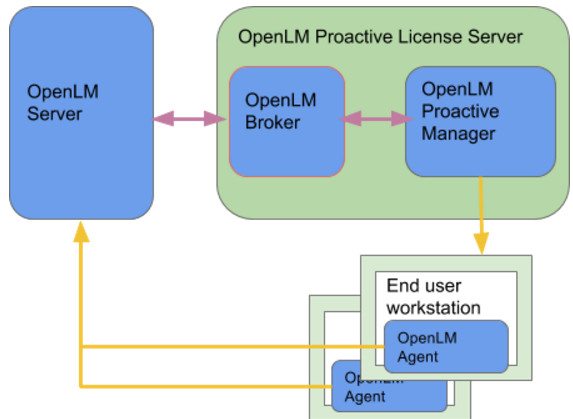 The OpenLM Proactive License Management solution is comprised of the following four components:

Some License Managers (e.g. Bentley) quantify license utilization according to “Buckets”. These are calendar time frames (e.g. hours), within which a specific session is active, and the license is regarded as consuming an entire bucket. For example:

The bucket consumption policy may include a grace period, during which a license is not considered to be consumed. For example:

The bucket consumption policy normally includes a minimal usage period, which may result in annoying excessive consumption charges. For example:

The OpenLM Proactive License Manager takes all the factors mentioned above into account, and enables administrators to apply limitations that intervene in the license checkout process and avoid excessive consumption of bucket licenses. 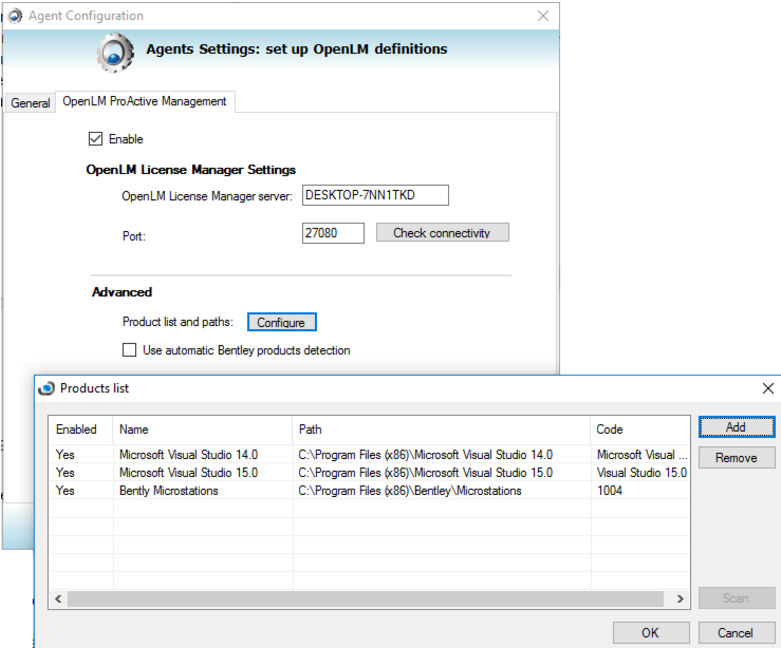 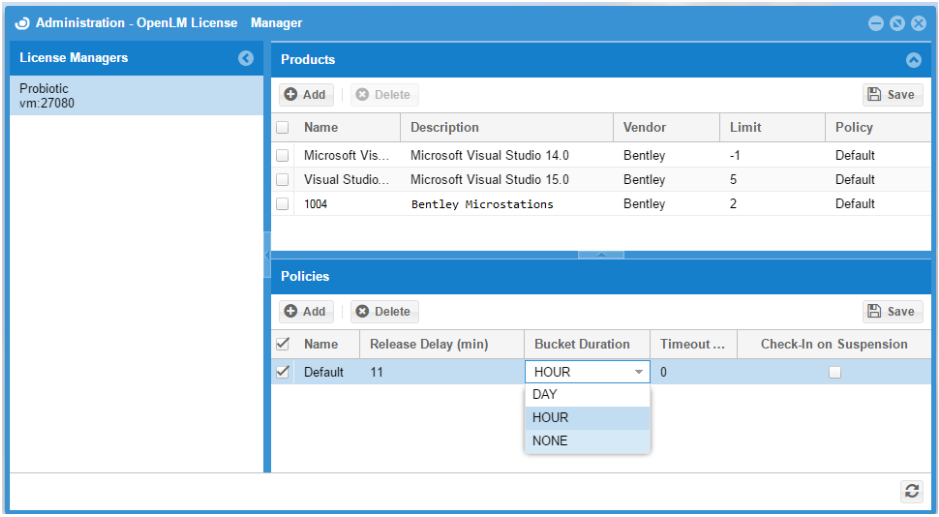 The OpenLM Proactive license manager is now able to intervene in the checkout of non-bucket licenses. This is accomplished by simply setting the bucket duration to ‘NONE’.

The Autodesk cascading mechanism is designed to ensure that all users will consume the minimal ranking licenses they need in order to do their work. For example, when a user launches AutoCAD 2016 and Revit 2016, the cascading mechanism may choose to consume a single suite license instead of the two aforementioned licenses.

Autodesk license administrators have brought up this matter to our attention, and we decided to respond with a new, attractive capability for Autodesk users; License administrators are now able to prohibit duplicate usage by intervening in the launch of Autodesk applications of different versions.

For example: when the DUP_GROUP (FlexLM) or ‘Share’ (Reprise RLM) parameter value of a specific feature (e.g. F1) is set to ‘UH’ (User+Host), a specific user (e.g. User1) launching several instances of the same feature  on the same host machine (e.g. Host1) will only consume a single license.

This information is clearly presented on the new “Checkout policy” window:

Version 3.3 has added the option to edit and upload FlexLM license files via the EasyAdmin web interface onto the license server machine. Following such an upload, the OpenLM Broker will remotely invoke a license server ‘re-read’ or ‘restart’ action, causing the FlexLM License server to take the new license file into account.

The EasyAdmin “License Activity” window is dedicated to reporting sessions that have ended, i.e. have a start date and an end date. Some users have found this presentation confusing, as licenses that were being consumed at the time of reporting were absent from this window.

OpenLM version 3.3 added the ability to present currently active sessions alongside the ones that have already been terminated. This is done by checking the new “Show current activity” box. The active sessions will be presented with a green background.

The EasyAdmin web interface enables users to produce advanced system alerts, with detailed selection filters. One of these is the “License Server not responding” alert, which notifies the user on the occurrence of a license server malfunction. OpenLM version 3.3 added the option to filter this alert and indicate when specific license servers are down. 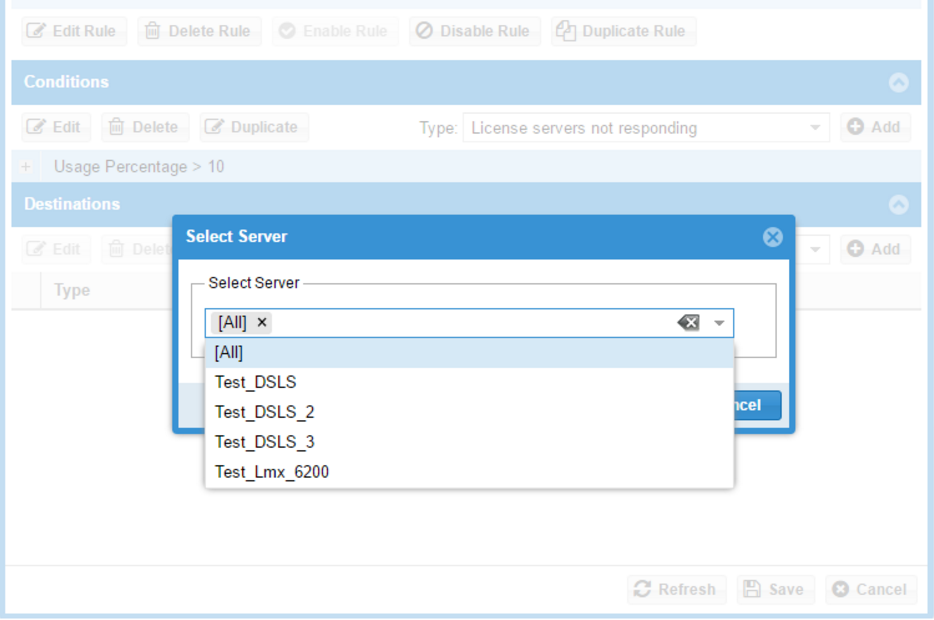 The new enhancements include:

In version 3.3 we changed the default presentation to the aggregated percentage of usage, i.e. each point (x,y) answers the question: “What is the percentage of usage time (y) that AT LEAST a given number of licenses (x) have been in use concurrently.

In the example below, for a total number of 12 licenses: 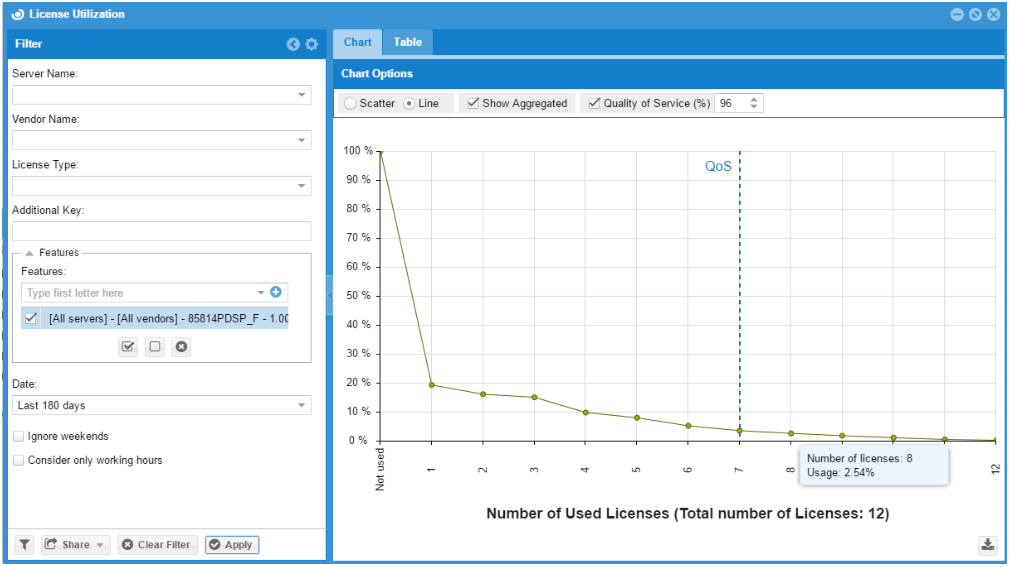 The benefits of the new version

The aggregated algorithm produces a monotonically decreasing function, which plainly presents the number of required licenses. In the example presented above, there have never been 12 licenses in contemporary use within the past 180 days.

We added the Quality of Service (QoS) parameter.In the example presented above, in order to support 96% of license requests, the organization would only need 7 licenses. Having procured 12 licenses means that the organization owns 5 redundant licenses.

By comparing the the two presentation formats (w/wo the “Show Aggregated” check box), one could notice ‘blips’ in the utilization chart (e.g. for the value of 3 licenses). These ‘blips’ may indicate abnormal usage patterns, such as long forgotten active sessions.

Changes in the denials report

The OpenLM 3.3 EasyAdmin web interface has seen some improvements in the license denial reports, to easily zoom in on the causes for license denials reported by the License Manager:

OpenLM 3.3 enables the scheduling and delivering of EasyAdmin reports. Specific report windows may be selected, filtered according to the user’s preferences, scheduled to execute at predefined timing, and propagated to specific role players in the organization via email. 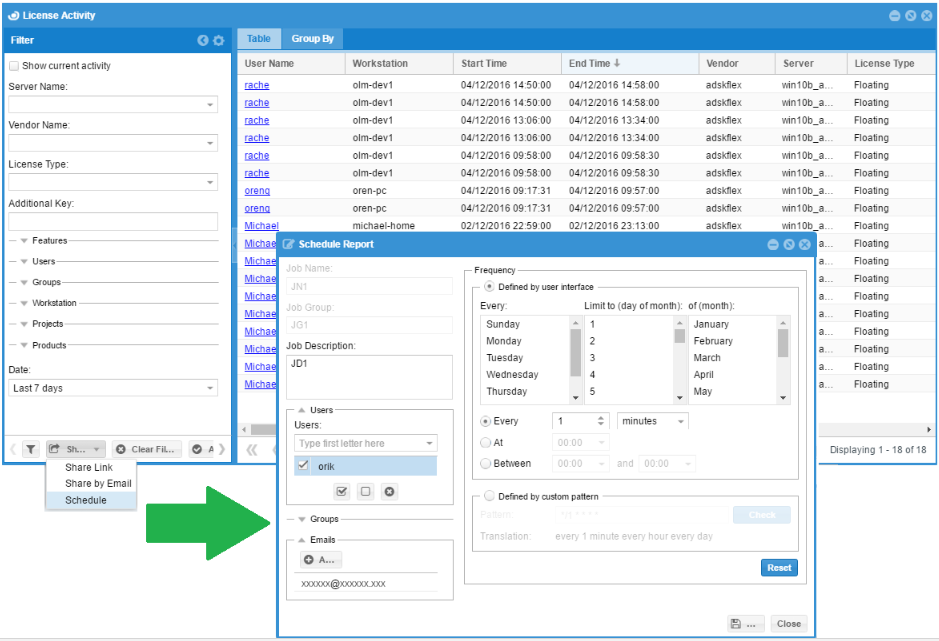 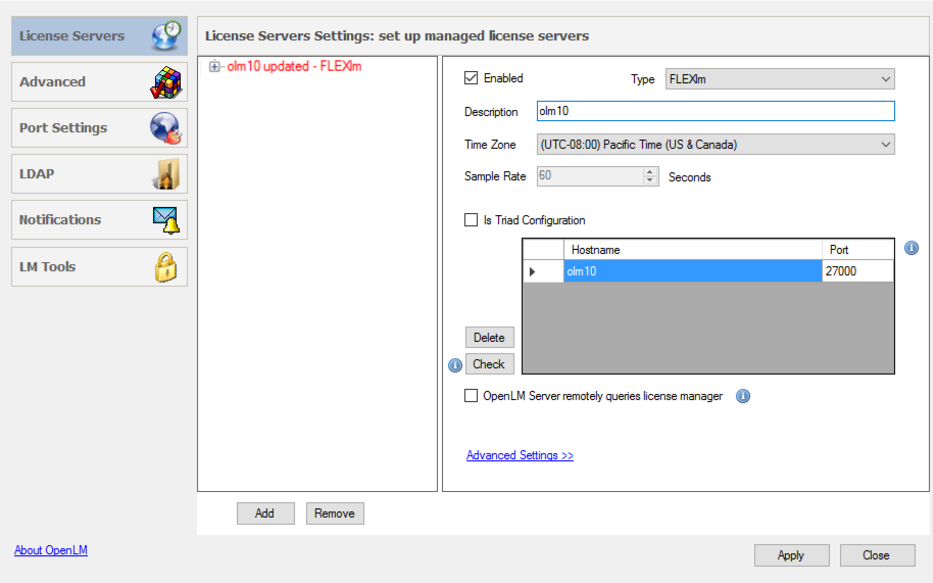 We added support for monitoring the T-Systems Licman license manager, which is required for T-System’s applications, such as Medina and Medina/SDM

We added support for reporting of DSLS token-based license usage

We have added the ability to read the RLM license file, and integrate its data in the OpenLM reports.

We have added the vendor column for Sentinel RMS licenses

The OpenLM EasyAdmin administrative web interface incorporates a role-based security access scheme, facilitating appropriate levels of access according to the role held in the organization.

In version 3.3, OpenLM has combined these capabilities to offer a Windows Authentication scheme. This feature enables direct access to the EasyAdmin web application following the standard Windows login process, employing the username and password registered on the organizational Directory Service. 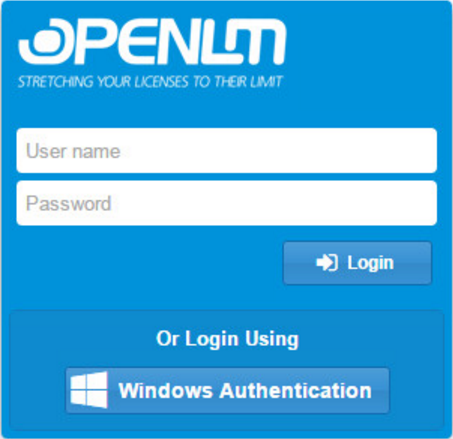 Version 3.3 of the OpenLM Broker has introduced the “Collapse All” button. This is useful for license administrators who monitor multiple license servers on the same machine. 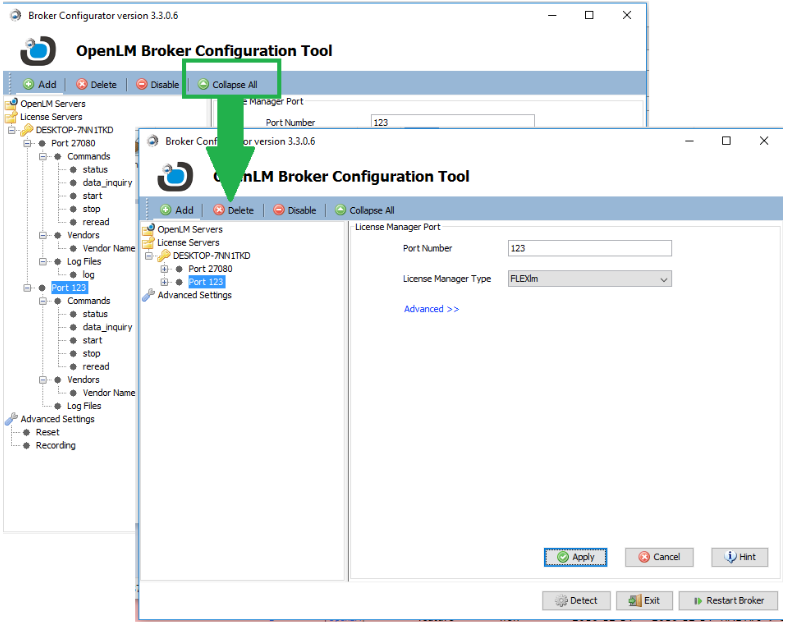 We have changed the way we interlace data streams pertaining to specific license servers’ usage and inventory information. This resulted in more robust, accurate usage reporting in real time.

We now present the timestamp of the latest received data from OpenLM Brokers on the OpenLM EasyAdmin ‘Servers’ window.

During the process of deploying OpenLM agents, the administrator is prompted whether they would want to support the new “OpenLM Proactive Application Manager”. If the Administrator chooses to support this feature, an additional service will be installed on the OpenLM Agent workstations:  the “OpenLM Software Locker” service.

The OpenLM 3.3 Agent has been modified to support “Save & Close” idle license harvesting for ArcGIS 10.4.1.

The OpenLM 3.3 Agent has been modified to support “Save & Close” idle license harvesting for ArcGIS Pro.

The OpenLM 3.3 Agent has been modified to support “Save & Close” idle license harvesting for Solidworks.

When OpenLM detects conflicting license usage data from multiple sources, a notification is displayed,  Users are presented the option to send the required information to our support team for analysis. 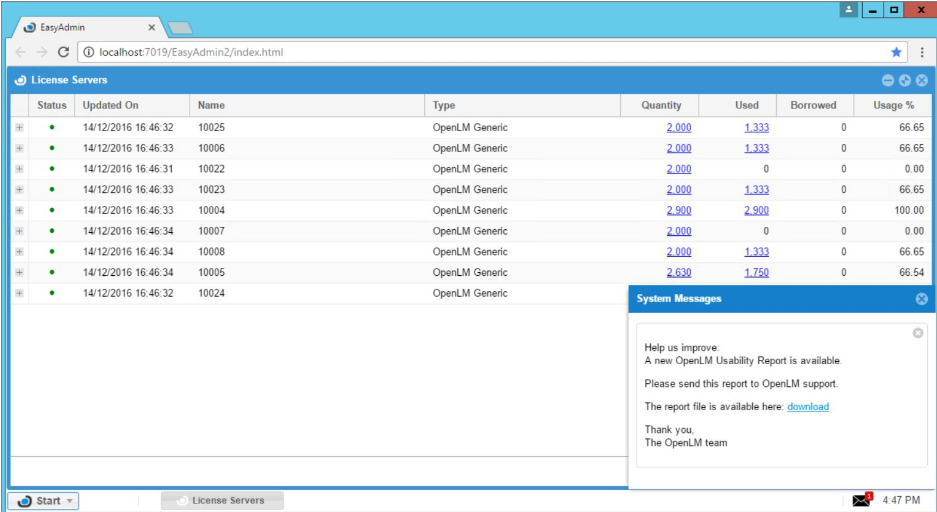