OpenLM supports license monitoring of a wide and ever growing variety of license managers, such as FlexLM and DSLS. This application note elaborates the steps required to configure OpenLM to interface the IBM-LUM license server, to monitor license usage and denials, and obtain license statistics.

There are three methods to query the IBM-LUM License Server, as elaborated below. This document refers to these methods henceforth:

Method 1 – Minimal installation. Installing only the OpenLM Server on the same machine as the IBM-LUM license manager. This method is the most straightforward, but lacks the benefits provided by the OpenLM Broker.

Method 3 – Installing the OpenLM Broker on the same machine as the IBM-LUM license server, query the License Server locally, and propagate the information to the OpenLM Server. The OpenLM server may be installed on any machine on the network (including the IBM-LUM license server machine). This is the most recommended method, as it displays various benefits for license administrators (e.g. obtaining license denial reports).

Methods 1 & 2 require the OpenLM Server to query the IBM-LUM license server. In order to enable that – follow these steps:

3. Select the LM Tools tab, located on the left side.

6. Type in the full path of the i4blt.exe file in the LUM executable file text box, e.g.:“C:Program Files (x86)OpenLMOpenLM ServerLMi4blt.exe”

After configuring the OpenLM configuration tool to work with IBM-LUM as described above, introduce a new IBM-LUM server under the License Servers tab:

6. Type in the IBM-LUM license server’s port number in the Port text box. (The IBM-LUM default port is 1515).

7. “Is Triad Configuration” : OpenLM supports multiple server redundancy configurations for IBM-LUM. This is referred to as “High Availability Licensing (HAL)”.

7a. For HAL multiple server redundancy configurations this box needs to be checked,

7b. OpenLM Brokers need to be installed on each of the IBM-LUM license server machines (see below).

7c. The HAL member server names can be obtained by running the following command line:

7d. Specify the different cluster’s server names and respective port numbers, one beneath the other, in the ‘Hostname’ list.

7e. Here is some general information on LUM cluster configuration and activation, from the license servers’ perspective.

The OpenLM Server is now able to monitor the IBM-LUM license server when both are installed on the same machine, as described in method #1, above.

2. Methods 2 and 3: Installing OpenLM on a machine other than the IBM-LUM license server #

If the OpenLM Server is installed on a machine other than the IBM-LUM license server, additional actions are required. These actions elaborate methods 2 and 3, already mentioned above:

There are many benefits for employing the method 3, requiring the installation of the OpenLM Broker on the License server machine. These benefits include:

The IBM-LUM Server enables other machines to query license usage and perform actions remotely. For a full install procedure please consult the Using License Use Management Runtime document. The following list is a short overview of this procedure.

1. Make sure that you have IIS installed and configured on the OpenLM Server Machine

3. Add a reference to the OpenLM Server on the IBM-LUM License server

4. After installing the LUM software on the OpenLM Server machine, the i4ls.ini file is created. For Windows versions Vista and beyond, copy this file from:

For pre-Vista versions, copy this file from

Note that if you use the Server’s IP instead of its name (for instance if the servers are located on different DNS domains so that DNS resolution does not work), a ‘#’ symbol must precede the IP.

4. Method 3: Employ the OpenLM Broker to propagate data to the OpenLM Server #

The OpenLM Server configuration will be exactly the same as performed in the previous method, i.e. without the Broker, except that the “Use Broker” box should be checked.

1. Download and install the latest OpenLM Broker version. Follow the installation and configuration instructions on the OpenLM Broker Application Note:

2. Configure The OpenLM Broker to interface the license server and the OpenLM Server:

2a. Click “Add port” and enter the port number as it was set on the OpenLM Server configuration tool (i.e.: 1515)

2b. The OpenLM hostname and port (e.g. OpenLM_Server and the default 5015)

2c. The vendor name should be set correctly (e.g. “CATIADBS”)

3. The ‘Status’ and “data_inquiry” commands should be as depicted below. Replace <fullpath> with the actual path of the i4blt executable on the IBM LUM license server. 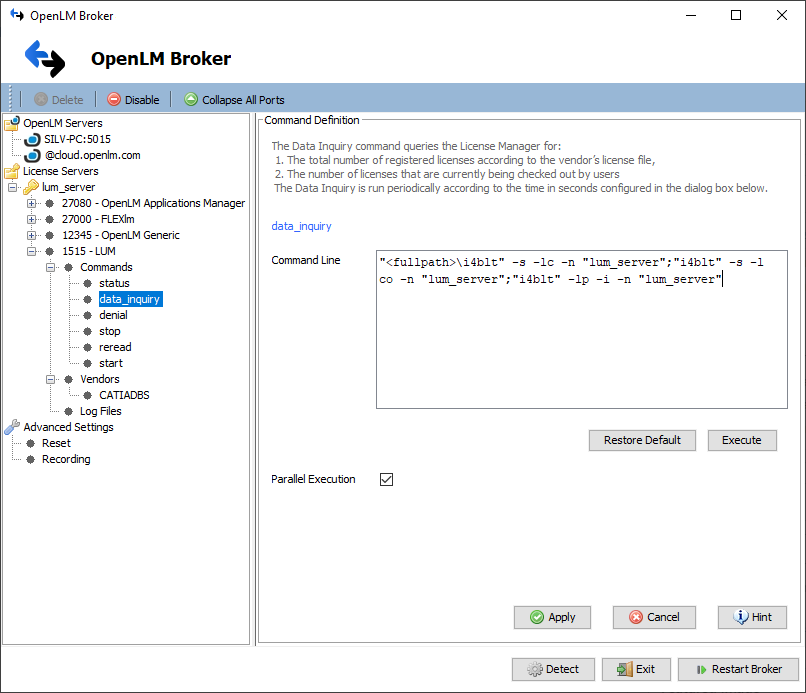 As mentioned above, executing this command will obtain the cluster’s member server names.

In order to verify OpenLM’s interface to the IBM LUM License Server, please

IBM LUM license denials will be presented in the EasyAdmin Start → Reports → Denials. Note that they are subject to “True denials” filtering. That means that denials’ reporting will be delayed for a while, to assert that the user has not been granted a license shortly after being denied one.

If you require further assistance on this subject, please contact support@openlm.com, and our team will be glad to assist.